The strategy adopted by the centre in January 2021 was full of challenges, and to reach the ambitious goals set for the next five years, we had to start working towards them right from the start of the year. After taking a closer look at the action plan for the year, it was clear that without reinforcements, we would not reach all the goals we had set. So we started looking for an assistant. There were many motivated candidates, and the search was successful – a new assistant Juss joined our team, and then in the second half of the year, Joosep took over.

In January, the Estonian government changed, and the direct danger to human rights had passed. We sent proposals on behalf of the equal treatment network to the parties’ representatives having coalition negotiations to promote human rights in Estonia. We also introduced the shortcomings of the human rights situation in Estonia to the other countries of the world at the UN Human Rights Council’s preliminary session of the third Universal Periodic Review.

At the start of summer, the long-awaited topic of data protection and digital rights was added to the centre’s fields of activity. Our new colleague Mari-Liis started working on the data protection interests at every level – she advises people whose rights have been violated; is a partner to the country by making suggestions and discussing the bills; searches for strategic cases to stop human rights violations through court, and raises public awareness about data protection.

Near the end of the year, our council grew by two new members. Andi Hektor and Toomas Käbin started their three-year-long activity to contribute to the work of the human rights centre. In December, we introduced our new logo, and on human rights day, we shared our 10th human rights report.

We would not reach our strategic goals alone, but anyone can help. We are just a tool that everyone who wants to can use to donate or volunteer to be part of the human rights movement. The goal is to move towards a society that respects everyone’s rights together. It’s a true joy to see that there is more and more of you with every passing year!

The year 2021 in numbers and pictures

We opened the data protection and digital rights field and actively worked on 16 different projects, nine of which are international and seven national. We got started with the development cooperation project, through which we can contribute to the empowerment of Ukraine’s civil society. A total of eight full-time workers and our incredible intern Anna-Lisa contributed to our work throughout the year. We also trained three new human rights ambassadors, and our council got two new members. An additional 36 people were ready to help out by volunteering. 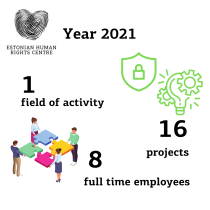 All year round, we advised asylum seekers, international protection recipients, and victims of discrimination in legal questions – a total of 116 times. With our help, nine strategic cases on refugee topics made it to court. And we also worked on three strategic cases about equal treatment and overall human rights protection, thanks to our donors. 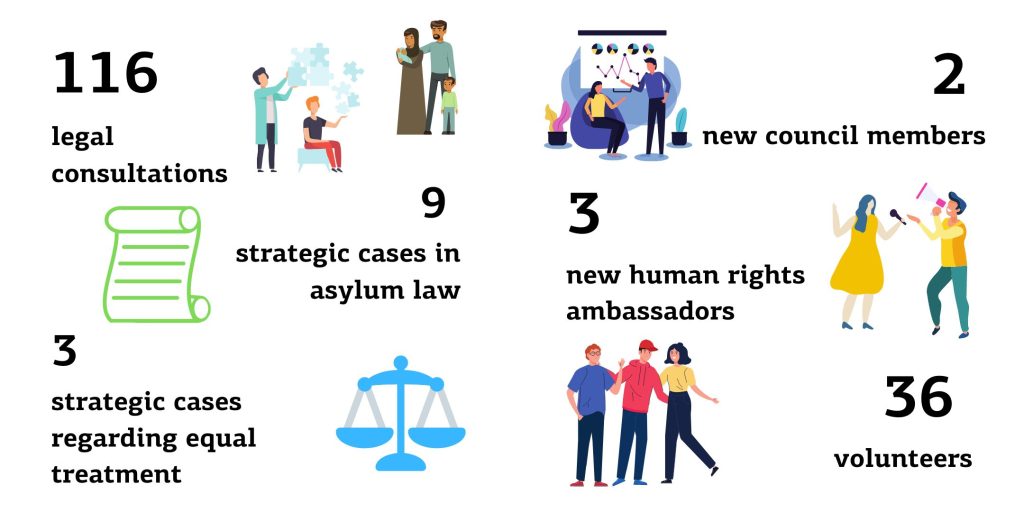 We published the fifth public opinion survey on LGBT rights. The survey revealed that the attitudes of Estonian people towards the LGBT community have significantly improved in recent years. On the other hand, on Human Rights Day, we presented the tenth human rights report, in which we stated that the human rights situation in Estonia had deteriorated in 2020 and 2021. Fourteen experts in their respective fields contributed to the report. For the first time, the report covered social human rights and the restrictions imposed during the pandemic.

We conducted nine studies for the European Union Agency for Fundamental Rights’ research network, the largest of which were about the restrictions caused by COVID-19 and children’s rights in criminal proceedings. In addition, in cooperation with international partners, we monitored the spread of hostility in shared media and looked for ways to curb the spread of hatred in the hackathon. 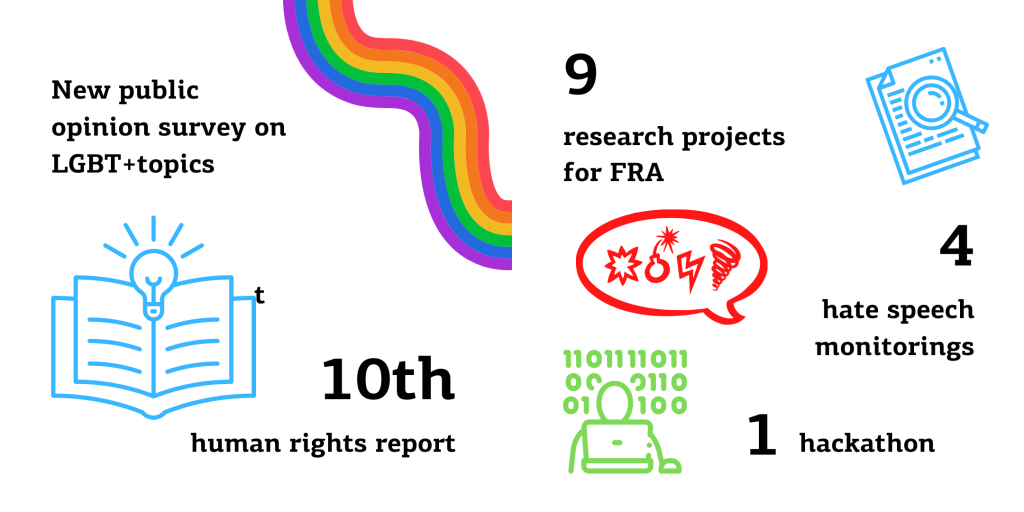 During last year, two events to join the Diversity Charter took place. Ten Estonian companies and organisations joined the charter in the spring and seven more in the autumn. The network already has 147 employers who share an interest in creating a work culture that respects diversity, innovative ideas, and success achieved by diverse experiences. More than 300 people took part in the sectoral events. As interest in diversity and inclusion grows year by year, we began training six new diversity advisers at the end of the year.

The European Diversity Month in Estonia was opened by a conversation evening with Daryl Davis on May 6th. More than 30 companies celebrated Diversity Day on May 12th, and on the same day, there was also a discussion on “How to make it good for everyone in Estonia?” During the year, the centre organised training sessions and seminars on hate speech, stereotypes, the pay gap, refugee involvement, non-violent communication and many other topics. We also visited several schools and added three new topics in the human rights guide: hate crimes and hate speech, migration and asylum, and intimate partner violence. 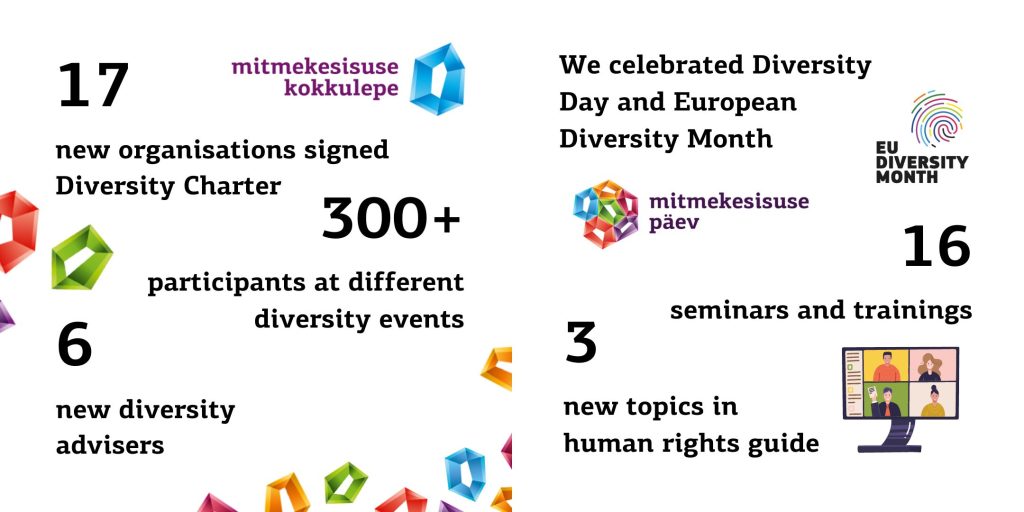 In the opinion pieces published during the year, we drew attention to Estonia’s general human rights situation and the need to restrict hate speech. The human rights report, the LGBT survey and our strategic cases received tons of media coverage.

Last year, we also opened an online store, which will definitely be expanded this year. We collected 30% more donations in 2021 than we did in 2020. During the year, 380 different people and organisations donated to the Human Rights Centre. With the collected donations, we paid for the legal aid costs of two strategic cases and issued a report called “Human Rights in Estonia in 2022”. It is also thanks to the donations that we can keep a financial buffer so that the centre’s work would not come to a standstill at a critical time and we could react immediately to changes in society.

Thank you for contributing to the development of human rights in Estonia! 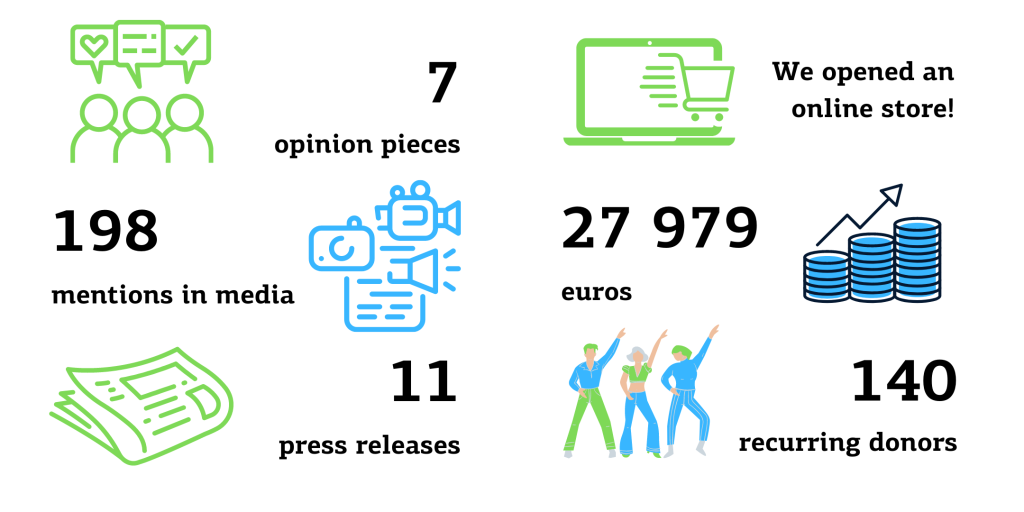 Check this out - we have a new logo! How do you like it?