2020 was anything but boring for the Human Rights Centre. At the beginning of the year the centre got a new executive director, and soon after that, two new team members also started. Then the COVID-19 crisis hit, and all of our plans and timetables for the year had to be binned and redone, and home became the office. In the summer, we decided to increase the strategic litigation area, and in addition to equal treatment and refugee work, we decided to fight for freedom of expression. In July, we were in for a big shock when we were caught in the middle of political games and our funding was temporarily suspended. Luckily, the situation was resolved.

In the autumn, we organised the first ever virtual international conference on hate speech; a conference focusing on hate speech against the LGBT community; and a hackathon on identifying and moderating hate speech. Before the year was over, we finalised the strategy for the next five years, as well as our plan of action for 2021. Throughout the year, we tried to do everything in our power to ensure that all the planned events would take place in some shape or form, but unfortunately, we had to cancel the annual Diversity Day in the spring.

Despite 2020 in many ways being the year of being alone, the centre was never on our own. We feel the backing of our supporters more and more – the support of people who care about human rights in Estonia and the development of the country. So – thank you to everyone who helps us as a volunteer, a donor or just by saying thank you. Your support makes us bigger.

We ran 15 projects last year – ten international and five domestic ones. We had an average of 7 full time employees who all had input into developing the centre and creating an Estonia which is friendlier to everyone. Our staff went on 3 working trips abroad in January and February, when international borders were still open. For the rest of the year, we met with our international partner organisations online. Over the course of the year, we had more than 130 constructive virtual meetings with them and we learned to use at least 10 different digital platforms for holding meetings. 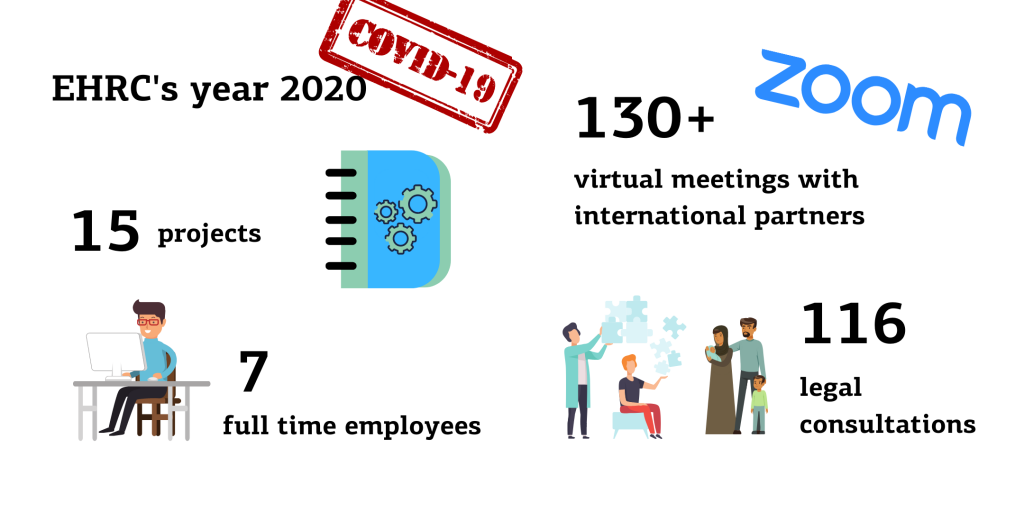 Throughout the year, we continued to give legal advice to asylum seekers, people under international protection, and victims of discrimination: a total of 116 cases. In the refugee field, we took 11 strategic litigation lawsuits to court. Thanks to our donors, we were also able to work on 5 strategic litigation cases around equal treatment and protection of human rights more broadly. Two of them were resolved positively – a case where the city of Tallinn was found to have treated a young man inappropriately, and the case of Darja and Jana, in which the court compelled the notary to review the couple’s rejected application for a cohabitation contract. The rest of the cases are ongoing.

We conducted 13 studies on rights of minorities, discrimination, wellbeing of the Roma people, hate crimes, and the effect of COVID-19 on human rights. At the end of the year, in cooperation with the other members of the Equal Treatment Network, we presented the shadow report on the human rights situation in Estonia to the UN. 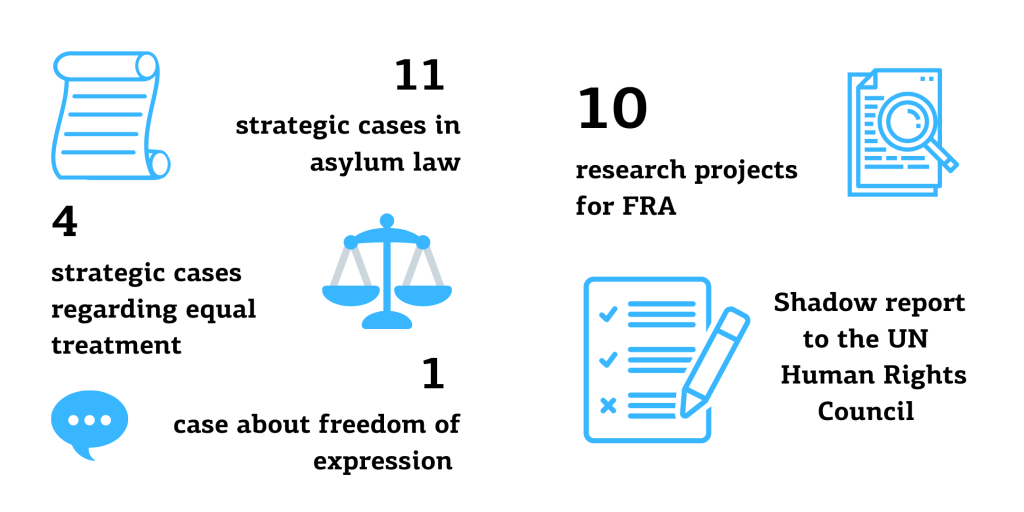 We also conducted different training sessions, for example, on refugees, hate speech, human rights and equal treatment to our Human Rights Ambassadors as well as people outside the organisation interested in these topics. We ran a total of 7 training sessions. We also visited 12 different schools, on site or virtually, and spoke to the young people attending about the importance of human rights.

We also organised 13 seminars and other major public events. Among others, we coordinated the Equal Treatment Stage of the Arvamusfestival (Opinion Festival), ran two international conferences on hate speech, and talked about self-managing organisations. Despite the coronavirus, we managed to organise 5 discussion events on human rights and meet local communities, when we visited Rapla in February, Narva, Kuressaare and Pärnu in March, and Tapa in September. In total, over 850 people participated in the events organised by the centre. 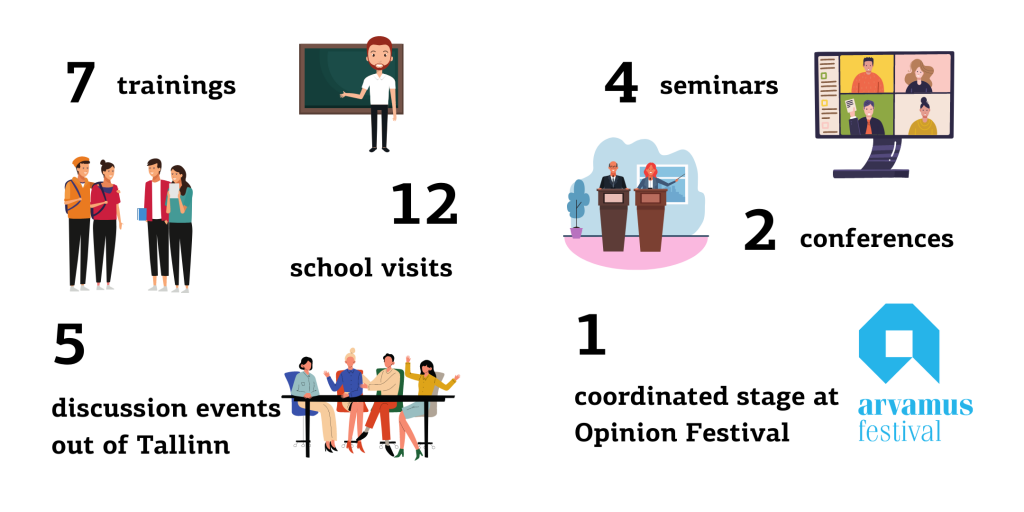 Diversity Charter gained 23 new signatories last year and in total, the network now has 136 members. The Diverse Workplace label was awarded to 32 employers who have focused on improving diversity and inclusion in their organisations. Dozens of organisations had their awareness raised on topics such as LGBT employee wellbeing, self-managing organisations, and equal treatment, as well as other topics of diversity.

Last year, the centre was featured in the news repeatedly. In 2020, media mentioned us almost 230 times, and we published 16 opinion pieces on important subjects ourselves. We also filmed a total of 24 videos – among others, on the topic of hate speech and hate crimes, interviews with organisations who were awarded the Diverse Workplace label, and training videos for our Human Rights Ambassadors. 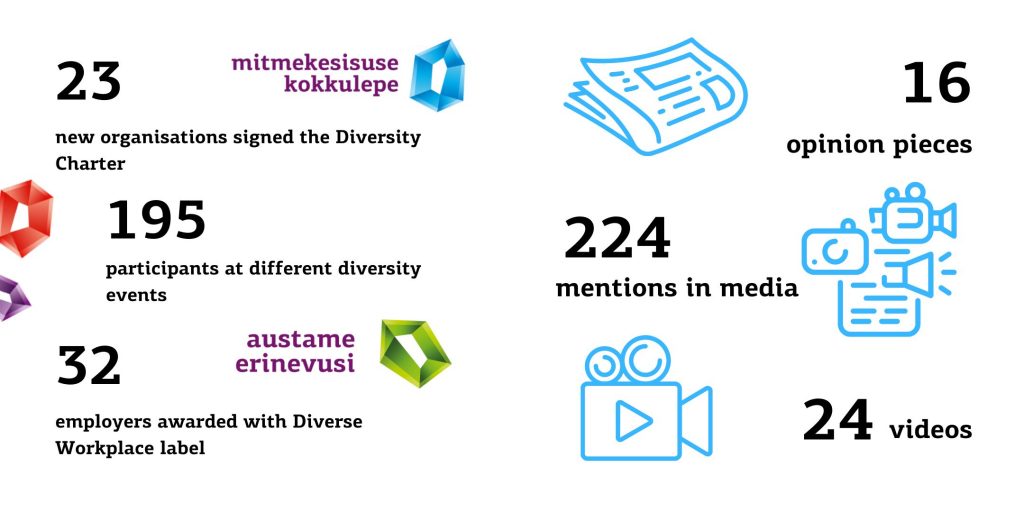 Much of our work has only become possible thanks to our volunteers and ambassadors. Throughout the year, we had an average of 8 volunteers who supported our work. 4 new Human Rights Ambassadors joined us from Ida-Virumaa, Lääne-Virumaa and Harjumaa, bringing the total number up to 8.

We are sincerely thankful that during this year, which was financially difficult for so many, donations to our work did not reduce drastically. We have in fact gained 53 new regular donors.

Thank you for making a contribution to human rights in Estonia! 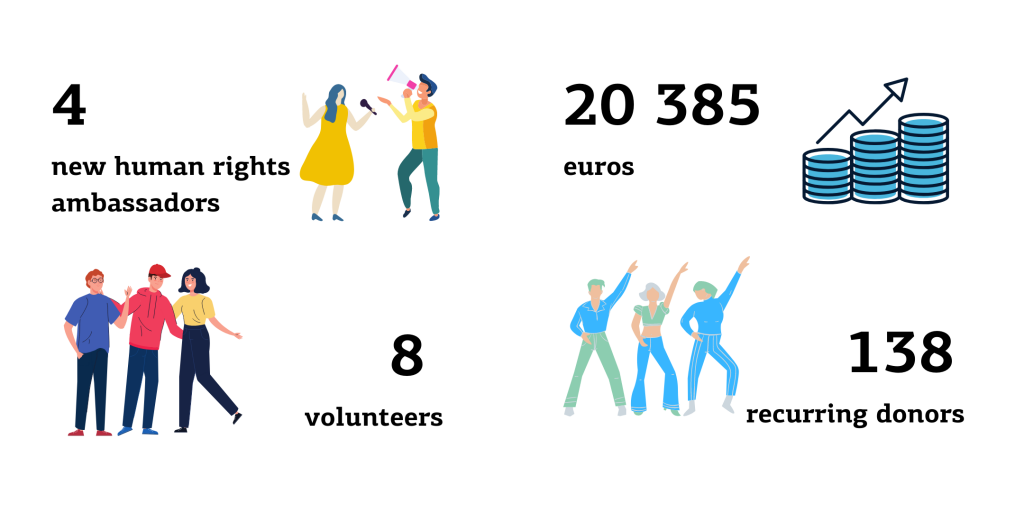 The Centre has finalised its strategy for the next 5 years

What will 2021 be like for the Estonian Human Rights Centre?